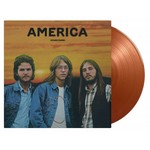 Just when America received a Grammy Award for Best New Artist in 1973, they released their second album Homecoming to great critical and popular acclaim. The single "Ventura Highway" preceded the album and hit a Top Ten status. The album followed suit and stormed the Billboard Top Ten. Polishing their sound, they built further on the Folk Pop formula they invented on their debut America a year earlier. Dewey Bunnell, Dan Peek and Gerry Beckley delivered a compelling and top quality set of songs, by many regarded as their best work..

SIDE B
1. TILL THE SUN COMES UP AGAIN
2. CORNWALL BLANK
3. HEAD & HEART
4. CALIFORNIA REVISITED
5. SATURN NIGHTS