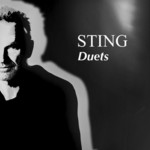 From the melismatic longing of "Desert Rose" with Rai music singer Cheb Mami and sultry groove of "It's Probably Me" with Eric Clapton to the uplifting 44/876 with Shaggy, which yielded his most recent and 17th Grammy award, Sting's colla­borations have become nothing short of cornerstones in the canon of popular music.

To celebrate some of these joint-works, he has compiled a special collection to include some of his most beloved duets with collaborators such as Mary J. Blige, Herbie Hancock, Eric Clapton, Annie Lennox, Charles Aznavour, Mylène Farmer, Shaggy, Melody Gardot, Gashi and more. The Duets album will also include the brand new, never-before-released song, "September" with Italian icon Zucchero, produced by Sting himself and mixed by 4-time Grammy Award winner Robert Orton.

Little Something with Melody Gardot
Its Probably Me with Eric Clapton
Stolen Car with Mylène Farmer
Desert Rose with Cheb Mami
Rise and Fall with Craig David
Whenever I Say Your Name with Mary J. Blige
Dont Make Me Wait with Shaggy
Reste with GIMS
We'll Be Together with Annie Lennox
L'amour C'est Comme Un Jour with Charles Aznavour
My Funny Valentine with Herbie Hancock
Fragile with Julio Iglesias
Mama with Gashi
September with Zucchero (previously unreleased, new recording)
Practical Arrangement with Jo Lawry
None Of Us Are Free with Sam Moore
In The Wee Small Hours Of The Morning with Chris Botti