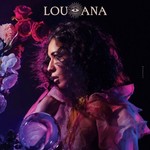 Moonlight Madness, Tāmaki Makaurau based artist LOU'ANA's debut album, infuses her trademark funk, jazz and soul with a hint of her pacific roots to create "Mystic Soul Music".
The eclectic, free-spirited sound of this three times Pacific Music Awards finalist LOU'ANA is one of unparalleled magic.

Having carved a place for herself within Auckland's vibrant music community over the past six years, and as part of the inimitable funk troupe Hipstamatics, who have delivered the groove to a multitude of festivals across the country.

LOU'ANA's voice carries the stature of an old soul - a cosmic cocktail of sweet and soulful, with an added gritty blues edge that references the golden age of Etta James, and the rawness of Amy Winehouse.

LOU'ANA and her seven piece band have transformed the album into an epic live experience and the show is on the road with upcoming sets at Earth Beat, Splore 2021 and NZ Spirit Festival.

"The title track 'Moonlight Madness' is an earthy brew, infused with my Samoan heritage. We used the pate (log drum) on the track, included a Samoan proverb that speaks of the synergy between the physical and spiritual realms, and I wrote a Samoan chant with my Aunty which calls upon the spirit of the moon goddess!"

"Rarely, in New Zealand, does a singer come along whose voice is so big, so beautiful and so luminous it contains worlds within worlds. Moonlight Madness is magnetic. It pulls at the emotions on different levels, even when the content of a lyric is a familiar story, such as a relationship that has gone sour.

Moonlight Madness is fully formed, meticulous in its attention to detail and draws from retrospective musical styles with forward-thinking production values, courtesy of creative catalyst and producer Nathan Judd, who makes the perfect dance partner.

Suffice to say, I'm thoroughly enchanted by Lou'ana and her Moonlight Madness. It is a once in a blue moon album." Five Out of Five Stars, Mike Alexander, MUZIC.NET.NZ