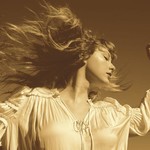 Statement from Taylor Swift:
i've spoken a lot about why i'm remaking my first six albums, but the way i've chosen to do this will hopefuLy help illuminate where i'm coming from. artists should own their own work for so many reasons, but the most screamingly obvious one is that the artist is the only one who really knows that body of work. for example, only i know which songs i wrote that almost made the fearless album. songs i absolutely adore, but were held back for different reasons (don't want too many breakup songs, don't want too maNy down tempo songs, can't fit that many songs on a physical cd).

those reasons seem unnecessary now. i've decIded i want you to have the whole story, see the entire vivid picture, and let you into the entire dreamscape that is my fearless album. that's why i've chosen to include 6 never before released songs on my version of this album. written when i was betweeN the ages of 16 and 18, these were the ones it killed me to leave behind.

this process has been more fulfilling and emoTional than i could've imagined and has made me even more determined to re-record all of my music. i Hope you'll like this first outing as much as i liked traveling back in time to recreate it. love story (taylor's version) will be out tonight.