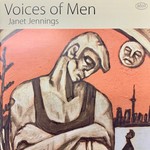 Including 'Songs of War' and 'Songs of Exile', Voices of Men features leading male vocalists, accompanied by renowned musicians, singing the words of some of New Zealand's most well-known male poets. Brian Turner's words in 'Taking Off', reflect on the typical kiwi bloke, adding humour and balance to the album. This album has been produced as a companion to Voices of Women, produced last year.

In creating Voices of Men, composer Janet Jennings has set to music a carefully selected range of poetry that reflects the experiences of men, New Zealand men in particular. She has used piano, violin and trumpet to accompany the vocalists - voices likely to be well known to opera audiences - James Harrison, James Ioelu and Will King. The renowned musicians accompanying them include pianists Katherine Austin, Richard Liu and Sarah Watkins, with James Jin on violin and Bill Stoneham on trumpet.

The CD comprises the following song cycles:
1. Taking Off is the settings of six poems by Otago poet Brian Turner for baritone and piano. There are a range of themes, from the humorous look at Kiwi blokehood (Semi-Kiwi), reflective thoughts on relationships (Song and Conjunctions), extended metaphor (Wind), to the celebration of life (Taking Off and Tombed). The settings are framed by a piano Prologue and Epilogue.

3. Thirteen Ways of Looking at a Blackbird, Wallace Stevens' iconic poem, has been set in 13 stanzas for baritone, violin and piano. The blackbird features in a unique way in each stanza.

4. Songs of War sets to music five poems by NZ's acclaimed war poet, Mike Subritzky, for baritone, trumpet and piano.
· Song of War
· I Thought of You
· The Tethered Goat
· A Sarajevo Haiku and Dead Girl's Tanka
· December Dreamtime

Dr Janet Jennings is one of NZ's leading composers, composing for chamber music, trio and orchestral works and for voice and dance. Her music is played internationally and throughout New Zealand, and her works often air on Radio NZ's concert programme. Voices of Men is her third album released under the Atoll label, the previous albums being Play-Pen, released in 2019 and Voices of Women, released in 2020.