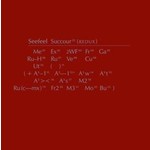 $85.00 In stock with supplier
ETA: 4-7 business days add to cart more by this artist

Seefeel's second album and their debut for Warp, available on vinyl for the first time since 1995 with an extra LP of bonus material.

The shoegaze elements of its predecessor had evaporated, and vast spaces of ambient and dub would come to inform Succour. Skeletal rhythmic elements amalgamating into their brooding, elemental and completely singular sound.
Seefeel proselytised the limitless potential of the post-rock genre with Succour - and produced one the greatest albums of the 1990s' in the process.

Sides A - D are the original album
Sides E & F is bonus material, mostly unreleased although a few tracks were included on out-of-print V/A compilations of the period