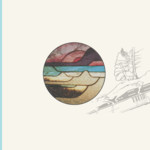 Keyboard Fantasies was originally self-released on cassette tape in 1986 and was recorded entirely on a DX-7 and TR-707 in the northern Canadian town of Huntsville, ON. Largely over-looked by the mainstream media, it caught the ear of a Japanese collector who contacted the artist in 2015 asking for copies to sell; they sold out instantly.