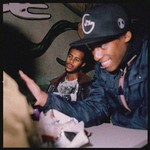 Muslim poet and songwriter Mustafa presents his debut project, 'When Smoke Rises', via his own Regent Park Songs label.

Mustafa's lead singles - 'Stay Alive' and 'Air Forces' - have been met with adoration from fellow artists, critics and fans and serve as a near-perfect introduction to an important new voice in music. Both songs are included on 'When Smoke Rises' alongside 'Ali'. They exemplify a style Mustafa himself describes as "inner city folk music" that finds musical inspiration in the folk greats such as Joni Mitchell, Bob Dylan and Richie Havens but channelled through the contemporary lens of Mustafa's modern-day Toronto.

Mustafa was moved to release his own music following the loss of close friends to gun violence. Much of his music is addressed to those departed friends and to his Toronto neighbourhood, Regent Park; a vehicle to honour and affirm the concerns of his community while providing sonic solace for those looking to make sense of their own loss.