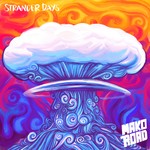 'the perfect soundtrack for long days and hazy nights. Cut from the same cloth as Bootleg Rascal, Ocean Alley…' - Amnplify