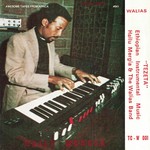 From their genesis as members of the Venus club in-house band in the early 70s, The Walias were at the forefront of the musical revolution during an era where modern instruments and foreign styles superseded the traditional fare to become the staple sound of Ethiopia. No one would argue that The Walias were the trailblazing powerhouse of modern Ethiopian music.

Walias released eight instrumental albums to varying degrees of success. In fact, only a couple of those shifted in notable numbers. But, when you're banging out record after record with the greatest voices in the history of Ethiopian music, there's always more than enough to go by and recording those non-vocals becomes pure indulgence for the band. Back then, Ethiopians - almost invariably - termed "instrumentals" as "classical", with an overwhelming consensus that they were merely produced as background music or fillers. Indeed, the only instrumentals made before the Walias were by the Ministry of Information, specifically, for those purposes. They hired session musicians to create and record theme tunes for their radio programs at their Abune Petros studios.

This Tezeta album is one of those that have been impossible to find for nearly three decades. Sourced by Awesome Tapes From Africa and expertly remastered by Jessica Thompson, its unique and funky renditions of standards and popular songs of the day are so quintessentially Walias, flavourful and evocative. Hailu's melodic organ, unashamedly front and centre in every track, makes even the complex pieces accessible.

Profoundly engaging; it's an immersive trip down memory lane for those of us getting reacquainted with it, while also an enthralling and gratifying experience for fresh ears.