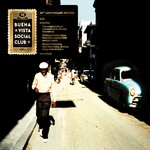 'Buena Vista Social Club' is both the name given to this extraordinary group of musicians and the album, recorded in just seven days in 1996 in Havana's 1950s vintage EGREM studios. It was clear from the atmosphere of the recording sessions that something very special was taking place. However, no one could have predicted that Buena Vista Social Club would become a worldwide phenomenon - awarded a Grammy in 1997 and, at 8 million copies, outselling any other record in the same genre.