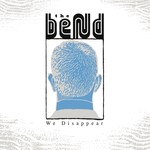 The Bend
We Disappear

This strange project began in 1987 with iconic NZ drummer Bruno Lawrence on the kit (his last known sessions), a very young Jonathan Zwartz, fresh from the Sydney Conservatorium, on double bass and guest vocalist the late, great Rick Bryant joining Fane, Tony and Peter in the studio, resulting in six songs in the can.

After that the wheels fell off and financial and personal issues meant the project was first shelved, then lost. Twenty-five years later, the tapes were unearthed by Peter during a spring clean. The Bend had a listen and decided the project should be completed.

Another six songs were written and the original band reassembled (minus Bruno who had by then physically disappeared), with Sydney drummer Hamish Stuart becoming the new Bruno and part of the family. By this time Jonathan had become a standout musician/composer in the world of Australian jazz and his masterful playing is a highlight of the record.