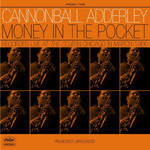 Cannonball Adderley's mega-successful album Mercy, Mercy, Mercy!, released in August of 1966, was supposedly recorded "live" at a venue in Chicago called The Club, but it was actually recorded in the studio of Capitol Records with a specially assembled audience.

For those who wonder what they really sounded like at that venue, Money in the Pocket contains unreleased live recordings of the Cannonball Adderley Quintet at The Club in Chicago on March 19 and 20, 1966. The only pieces officially released were edited 45-rpm single versions of "The Sticks," "Money in the Pocket," "Hear Me Talkin' to Ya," and "Cannon's Theme." This 2005 reissue restores those tracks to their original full lengths while adding "Introduction to a Samba," "Requiem for a Jazz Musician," "Fiddler on the Roof," and a nice version of "Stardust."

Cannonball employed the same excellent band as heard on the Mercy, Mercy, Mercy! album -- cornetist Nat Adderley, keyboardist Joe Zawinul, drummer Roy McCurdy -- with the exception of bassist Herbie Lewis, who replaced Victor Gaskin. Any Cannonball Adderley fan will want to own this.