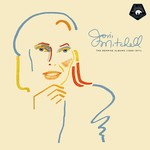 On June 22, 1971, Joni Mitchell released Blue, concluding her prolific four album run for Reprise Records with an album considered by many to be one of the greatest of all time. Its stirring, confessional songs have been celebrated by music lovers and critics alike for decades while inspiring a wide variety of artists as diverse as Prince and Taylor Swift. Even today, its stature as a masterpiece continues to grow. Just last year, the album was named #3 on Rolling Stone's list of the "500 Greatest Albums of All Time."

To celebrate the album's 50th anniversary, Rhino is releasing The Reprise Albums (1968-1971), the next instalment of the Joni Mitchell Archives series, featuring newly remastered versions of Blue (1971) and the three albums that came before it: Song To A Seagull (1968), Clouds (1969), and Ladies Of The Canyon (1970). In the case of Song To A Seagull, the original mix has been recently updated by Mitchell and mixer Matt Lee.

The Reprise Albums (1968-1971) includes essential tracks like "River", "Chelsea Morning", "Both Sides, Now", "Big Yellow Taxi", "Woodstock", and "The Circle Game". Clouds, her second album, was certified gold and won the 1969 Grammy (her first of nine) for Best Folk Performance. Ladies Of The Canyon and Blue were both certified platinum, while the latter was inducted into the Grammy Hall of Fame in 1999.