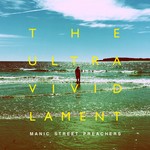 'The Ultra Vivid Lament' is both reflection and reaction; a record that gazes in isolation across a cluttered room, fogged by often painful memories, to focus on an open window framing a gleaming vista of land melting into sea and endless sky.

'The Ultra Vivid Lament's eleven tracks perfectly marry introspection, quiet rage and sublime, irresistible tunes. Those elements are there throughout, from the opening ambient hum of 'Snowing In Sapporo' to the galloping 'The Secret He Had Missed's push-and-pull duet imagining dialogue between Welsh brother and sister artists Augustus and Gwen John; via 'Diapause's sublime contemplation and 'Happy Bored Alone's stoic wishful thinking.

Musically, 'The Ultra Vivid Lament' is inspired by a formative years record box (ABBA, post-Eno Roxy, the Bunnymen, Fables-era REM, Lodger) though the end result could only be the unique union of James Dean Bradfield, Nicky Wire and Sean Moore, collectively one of the UK's most consistently brilliant rock'n'roll bands for over three decades.