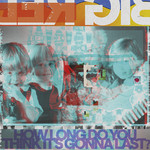 Big Red Machine
How Long Do You Think It's Gonna Last?

Ever since childhood, learning to play various instruments in a suburban Cincinnati basement alongside his brother Bryce, Aaron Dessner has consistently sought an emotional outlet and deep human connection through music - be it as a primary songwriter in The National, a founder and architect of beloved collaboration-driven music festivals, or collaborator on two critically acclaimed and chart-topping Taylor Swift albums recorded in complete pandemic-era isolation at his Long Pond Studio in upstate New York, among many other projects. Through it all, Dessner has brought together an unlikely community of musicians that share his impulse to connect, celebrate and, most of all, process emotion and experience through music.

This generous spirit and desire to push music forward has never been more deeply felt than on Big Red Machine's How Long Do You Think It's Gonna Last?, the second album from Dessner's ever-morphing project with Bon Iver's Justin Vernon.

New Big Red Machine material began taking shape in spring 2019, when Vernon came to visit Dessner at Long Pond. The first week produced songs such as "Reese," "8:22am" and eventual album opener "Latter Days," a haunting number sung by Vernon and Anaïs Mitchell that set the emotional tenor for what was to come.

Many of Dessner's previous collaborators and friends show up for him here, continuing the reciprocal exchange of ideas that has come to define his creative community. Songs feature guest vocals and writing contributions from artist friends including Fleet Foxes' Robin Pecknold ("Phoenix"), Ben Howard and This Is The Kit ("June's a River"), Naeem ("Easy to Sabotage'), Sharon Van Etten, Lisa Hannigan and My Brightest Diamond's Shara Nova ("Hutch," a tune inspired by Dessner's late friend, Frightened Rabbit frontman Scott Hutchison) and Taylor Swift ("Birch" and "Renegade," the latter an instant-classic Taylor earworm summed up by the poignant lyric "Is it insensitive for me to say / get your shit together so I can love you."