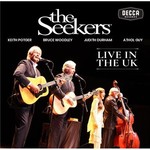 Four months after the sold-out success of The Seekers' Golden Jubilee 'Farewell' Tour of Australia in late 2013, the group and their team reconvened to do it all again in the United Kingdom in 2014, winding their way through Wales, Scotland and England with a 15-date sold-out tour.

When Judith Durham, Athol Guy, Keith Potger and Bruce Woodley took to the stage for the last time, the audience was on its feet clapping and cheering for several minutes before they even sang a note. Far from any sense of sadness or regret, the mood on this tour was one of celebration and appreciation, both for the group and their loyal fans.

CD1:
Come The Day
I'll Never Find Another You
A World Of Our Own
Love Is Kind, Love Is Wine
The Water Is Wide
When Will The Good Apples Fall?
Silver Threads And Golden Needles
Colours Of My Life
Morningtown Ride
Just A Closer Walk With Thee
Myra
I Am Australian
Gospel Medley

CD2:
Someday, One Day The Seekers
When The Stars Begin To Fall
The Last Thing On My Mind
You're My Spirit
Walk With Me
Guiding Angel/Guiding Light
Louisiana Man
The Olive Tree
Red Rubber Ball
Georgy Girl
Keep A Dream In Your Pocket
The Carnival Is Over