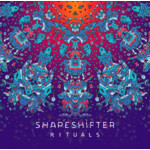 This new record has been a long time in the making, as COVID 19 halted the process for release, but New Zealand's response allowed the band to tour the new songs and build the hype despite the delay.

Rituals was produced by Sam Trevethick and sound master Tiki Taane at his solar powered home studio 'Tikidub Studios' in Papamoa, recorded at Massey Studios in Wellington and engineered by Toby Lloyd and Michael Sutherland.

The album has already served up multiple singles heard across the festival and touring circuits since the songs came to fruition in 2019. Found in You, Ritual (Under your Spell), The Roxxy, and Light Speed have been in high demand from audiences.

Rituals stays true to classic Shapeshifter form with the soulful anthemic drum and bass tracks, while also exploring the themes of earlier records both sonically and lyrically.