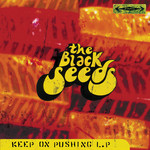 Twenty years on, The Black Seeds mark the anniversary of their platinum debut album with a limited red coloured vinyl release.

Keep On Pushing's bold themes of love, optimism and solidarity has resonated with fans across the world, shaping them as the creative, vibrant 8 piece band they are today.

"This album marked a change culturally as well as in sound, a south pacific take on soul, where we were proud of our multicultural heritage and our accents. It was a move away from DJ's to a big band sound. It was the beginning of The Black Seeds as a party band, we wanted to create a funky feel good sound that embraced everyone who experienced it." - Barnaby Weir, Lead singer and founding member.

This special anniversary 180g vinyl edition features mixes of all ten tracks from the original album.