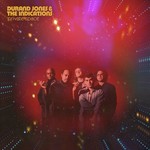 Following the "immaculate and eternal soul" (The Guardian) of The Indications' 2019 album, American Love Call, Private Space unlocks the door to a wider range of sounds, boldly launching the band into a world of synthy modern soul and disco beats dotted with strings.

Anchored by the high-low harmonies of Aaron Frazer (drums/vocals) and Durand Jones (vocals), and rounded out by Blake Rhein (guitar), Steve Okonski (keys), and Mike Montgomery (bass), The Indications are true masters at melding revival sounds with a modern attitude. Between production work, solo efforts and major sold-out shows, Durand Jones & The Indications continue on an unstoppable upswing.

With live music temporarily out of the equation, The Indications were able to dive deep into recording their third LP. Up-tempo tracks like "Witchoo," "The Way That I Do" and "Sea of Love" practically manifest the flicker of a disco ball, their pop-funk grooves recalling Idris Muhammad and Raphael Saadiq as well as Pete Rock and DJ Premier. You'll slow it down as the group evokes the likes of Teddy Pendergrass, the Isley Brothers and Sylvia on "Ride or Die" or "More Than Ever" ("I've never felt so sexy as when I was singing that track," says Jones).