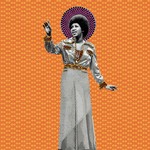 To say that Aretha Franklin was one of the greatest American artists of all time is an understatement. Her multi-octave voice moved millions around the world during an unrivalled career that spanned six decades and garnered the singer-songwriter every achievement and honour imaginable.

This album includes 20 highlights from the Queen of Soul's 4CD set including previously unreleased tracks "Call Me" - Alternate Version, "Until You Come Back To Me" - Work Tape, "You Light Up My Life", and "(You Make Me Feel Like) A Natural Woman" - Live, which was originally broadcast on The 38th Annual Kennedy Center Honors on 12/19/15.