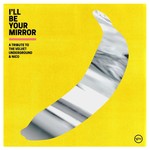 Various Artists
I'll Be Your Mirror: A Tribute To The Velvet Underground & Nico (LP)

The 1967 release of The Velvet Underground & Nico, the Velvet Underground's debut album with its iconic Andy Warhol-designed peel-off banana cover, was a seminal event, kicking off a process of aesthetic infiltration that continues to this day. The record single-handedly redefined the boundaries of what rock & roll could achieve and express, inventing the very notion of alternative rock and laying the blueprint for punk, grunge and every rebellious underground gesture to follow.

While the Velvet Underground's avant-art credentials are on full display on I'll Be Your Mirror, Kurt Vile & The Violators' guitar-charged "Run Run Run" provides a reminder that they were often also a torrid rock & roll band. Kurt Vile says: "I literally covered "Run Run Run" when I was a kid. In my late teens with my band at the time. So it was pretty cosmic, let's say. There is a direct connection to certain indie bands and beyond w/ the Velvets. That's why the Velvets are a classic. You know it can have doo-wop in there and things like that, but it can also have this jagged noisy thing, and it immediately let me feel like I could do anything. The possibilities are endless. You're completely free. Unapologetic and effortless."