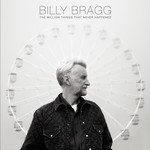 The record was produced by Romeo Stodart and Dave Izumi at Echo Zoo studio in Eastbourne. All songs are written by Billy Bragg apart from the final song (Ten Mysterious Photos That Can't Be Explained), which is co-written by Billy's son Jack Valero.

1. Should Have Seen It Coming
2. Mid-Century Modern
3. Lonesome Ocean
4. Good Days and Bad Days
5. Freedom Doesn't Come for Free
6. Reflections on the Mirth of Creativity
7. The Million Things That Never Happened
8. The Buck Doesn't Stop Here No More
9. I Believe In You
10. Pass It On
11. I Will Be Your Shield
12. Ten Mysterious Photos That Can't Be Explained