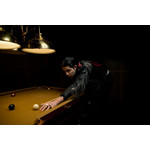 Shaun Blackwell had been tip-toeing around the idea of a solo project like this one for a while - hinting at this sound through the various prisms of different bands. Only last year, though, did he finally put an array of other musical outlets on the back burner in order to work towards what would become The Lonely Hunter. A glittering six-track ode to sixties pop, it takes its cues from both classic and contemporary influences, and embraces the timeless lovesickness of The Ronettes, The Shirelles and The Shangri-Las - subtly subverting it to focus on modern relationships, masculinity, and his own roots as a New Zealander. As Hemi Hemingway, he's part heartbroken crooner, part emotional explorer.

An experiment with a four-track recorder led him down a path he'd often hoped to traverse, reimagining the doo-wop of sixty years ago both technologically - he'd feed his taped work back into Logic - and thematically, broadening his own horizons by taking influence from the work of artists and writers who express themselves and their experiences genuinely. Sheer Mag, Angel Olsen, Aldous Harding and Shannon and the Clams - particularly Shannon Shaw's solo album, Shannon in Nashville - provided inspiration as he penned his own lyrics for The Lonely Hunter.

Hemingway's remarkable feat on The Lonely Hunter is bringing together such a diffuse collection of inspirations to produce a group of tracks that feel entirely in his own image; he nods to Isabel Allende's Daughter of Fortune, John Waters' Role Models and Min Jin Lee's Pachinko as crucial texts, whilst the spirit of Orville Peck is palpable in the EP's haunting country aesthetic - Hemi Hemingway would be very much at home on the stage of Twin Peaks' Roadhouse. With the world slowly beginning to whir into post-lockdown life, what began as a simple experiment looks set to become his creative lifeblood. "I'm already working on the next release, and the idea of an album is really appealing - hopefully with some more input from other people," says Hemingway, who played everything bar the saxophone on The Lonely Hunter. "I've put so much of myself into this project, and it's already exceeded my expectations - I just want to keep pushing and exploring."

Burnin' Blue
It's So Hard To Say Goodbye
The Lonely Hunter
Hemi's Lament
Move Over Darling
My Lover, A Strange Her