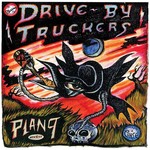 On July 13, 2006, Drive-By Truckers set up shop at Plan 9 Records in Richmond, VA. It was the 25th Anniversary of the store. The band performed to a packed house and played a blistering set of fan-favourites featuring the songs "18 Wheels Of Love", "Let There Be Rock", "Goddamn Lonely Love" and "Daddy's Cup".

The performance was also set up to benefit the Bryan and Kathryn Harvey Family Memorial Endowment. The foundation provides, among other things, music scholarships in the Richmond area. Lead vocalist and songwriter Patterson Hood ended up writing the song "Two Daughters and A Beautiful Wife" about Bryan Harvey and his family.

Now a successful solo artist, Jason Isbell was a member of the band at the time of this recording.