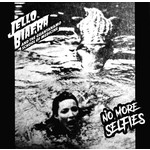 Hear the inimitable Mr. B skewer the place we've put ourselves in, like no one else would - or could - as he and The Guantanamo School of Medicine capture the full power of the live shows on disc as never before.

Only so many artists have a track record of lyrics this good, and back it up with music as good or better. It's usually one of the other, but rarely this fierce, thanks to the wall of sound production of the mysterious Marshall Lawless, with Kurt Schlegel at the board this time.

From Dead Kennedys to Lard to the now-classic albums with the Melvins, DOA, NoMeansNo, Mojo Nixon; and of course, The Guantanamo School of Medicine, there is no better primal scream therapy than Jello Biafra songs!

A. No More Selfies
B. The Ghost Of Vince Lombardi