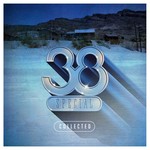 38 Special is an American southern rock band formed by Donnie Van Zant and Don Barnes in 1974 in Jacksonville, Florida. The band have since released twelve albums, and released a string of hits including "Caught Up in You" and "If I'd Been the One", both of which reached the top position of the US Mainstream Rock Chart. Other popular songs include "You Keep Runnin' Away", "Teacher, Teacher", "Rock & Roll Strategy" and "Second Chance".