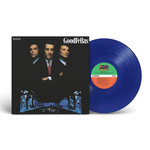 Martin Scorsese's Motion Picture "Goodfellas" needs little introduction. It is widely regarded as one of the greatest films ever made, and the ultimate mob movie.

The soundtrack features artists Tony Bennett, Aretha Franklin, The Shangri-las and many more. It is a very rare find on vinyl, having only being pressed in a couple of small runs in the early 1990s.

A1. Tony Bennett - Rags to Riches
A2. The Moonglows - Sincerely
A3. The Cadillacs - Speedo
A4. Billy Ward And His Dominoes - Stardust
A5. The Harptones - Life Is but a Dream
A6. The Shangrilas - Remember (Walkin' in the Sand)
B1. Aretha Franklin - Baby, I Love You
B2. Bobby Darin - Beyond the Sea
B3. Cream - Sunshine of Your Love
B4. Muddy Waters - Mannish Boy
B5. Derek And The Dominoes - Layla (Piano Exit)