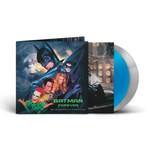 Batman Forever (Music from the Motion Picture) is the soundtrack to the 1995 Tim Burton produced film. It was nominated for multiple Academy and Golden Globe awards.

The soundtrack contains a number of hit singles including Seal's "Kiss from a Rose", which won three Grammy Awards, U2's "Hold Me, Thrill Me, Kiss Me, Kill Me", and songs from The Flaming Lips, The Offspring, Nick Cave, Michael Hutchence (of INXS), PJ Harvey and Massive Attack.