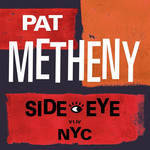 Pat Metheny has unveiled the latest chapter in his wildly prolific career - Side-Eye, a new setting featuring the 20-time GRAMMY winner accompanied by a handpicked and rotating cast of players featuring some of the most exciting and innovative new musicians on the New York scene.

Recorded just before the pandemic, Side-Eye NYC (V1.IV) deftly balances a mix of stunning new originals with inventive reworkings of some of Metheny's most beloved compositions such as "Timeline", which originally featured Metheny performing with fellow icons Michael Brecker and Elvin Jones. Now bringing that same unmistakable spirit to a new crop of players who grew up with his music as a part of their musical heritage, Metheny's Side-Eye seamlessly flows in his usual genre-defying way from post-organ-trio grooves to expansive mini-suite forms to simply Metheny at his most rocking.