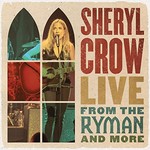 Sheryl Crow
Live From the Ryman And More

At a time when concerts have been suspended, Crow delivers LIVE FROM THE RYMAN & MORE. The guitar-forward concepts that defined almost three decades of the most indelible songs for driving hard, chilling out and making one's mark on the world bristles with the kind of brio that translates those performances no matter the space consumed.

From the first propulsive downstrokes of "Steve McQueen," Crow takes control of the moment. Recorded over five nights at Nashville's historic Ryman Auditorium, Los Angeles' cutting edge Ace Theatre and the legendary Newport Folk Festival in Rhode Island, the songwriting superstar delivers a masterclass in Roots music -- from Rock, Pop, Gospel, Blues that is psychedelic in places and Country in others -- as well as friendship and the joy of being alive. Joined by friends, influences and rising stars such as Brandi Carlile, Emmylou Harris, Jason Isbell, Lucius, Maren Morris, Natalie Hemby, Amanda Shires and Stevie Nicks, LIVE FROM THE RYMAN & MORE captures a zeitgeist of knowledge, power and the rapture of utter freedom stretched over some of the tersest playing this side of The Rolling Stones.