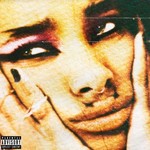 Willow
lately I feel EVERYTHING

"I just wanted to let loose with this album. I wanted to have fun and be young and not be so existential and worrying all the time," says WILLOW.

At only 20 years old, WILLOW has spent half her life in the music industry. With lately I feel EVERYTHING, a decade of growth both in the industry and as a young woman come to a head. Her new single and LP is a love letter to that constant evolution.

She began working on the album in 2020, during the pandemic. With all the extra time on her hands at home, she began recording demos that she would later re-record when she felt like she could safely enter a studio. It was a new process for her, born out of caution, but it helped her capture the rawness of her new sound. On the record, WILLOW channels the pop-punk and emo heroes she adored as a teenager, like Avril Lavigne, My Chemical Romance and Paramore. "I thought this was a really dope outlet for a new energy I wanted to bring to my music," she says