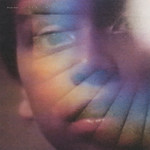 Far In is Helado Negro's first album on 4AD and the seventh full-length album. It follows his breakthrough release 'This Is How You Smile', spotlighted as Pitchfork's #7 Best Album of 2019.

When Roberto Carlos Lange, the musician known as Helado Negro, began writing 'Far In' immediately following the release of This is How You Smile, he could not have predicted that we would soon need to learn how to stay at home and be the stars of our domestic dance floors with intimates and online communities.

Roberto and his partner, the visual artist Kristi Sword, had planned to visit Marfa, Texas for an early 2020 residency to work on their collaborative project Kite Symphony. Once the pandemic hit, they decided to stay in Marfa through the summer, inspiring Roberto to write a significant number of songs on the upcoming album.

Driving back to Brooklyn in the fall inspired by his work in the desert, Roberto auspiciously purchased a Rhodes from a friend who 20 years earlier gave him his first synthesiser, an Arp Odyssey 2800. The electric piano was a catalyst that guided much of the remaining songwriting for the album.