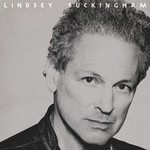 This self-titled album is Lindsey Buckingham's first solo release since 2011's Seeds We Sow and follows his departure from Fleetwood Mac. As with the seven studio and three live albums he has released as a solo artist, the new project showcases Buckingham's instinct for melody and his singular fingerpicking guitar style, reaffirming his status as one of the most inventive and electrifying musicians of his generation.

Written, produced, and recorded by Buckingham at his home studio in Los Angeles, CA, the new album is a welcome display of Buckingham's instantly recognizable guitar work and vocal layering, particularly on songs such as "Power Down", "Scream" and "Swan Song". Elsewhere, Buckingham pays homage to '60s folk group the Pozo-Seco Singers' hit single "Time", a song he's admired since he was as a teenager and has long intended to cover.