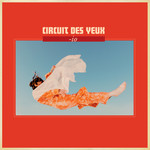 A celebrated figure in Chicago's music community, she has released acclaimed albums via De Stijl, Thrill Jockey, and Drag City and toured throughout the world. However, -io is Circuit des Yeux's most ornate and elaborate work to date, a set of compositions that nest Fohr's otherworldly four-octave voice amid a 24-piece string, brass, and wind ensemble.

The album was put to tape last fall by Cooper Crain at Chicago's Electrical Audio studio and mixed by Marta Salogni (Bjork, Holly Herndon) with Fohr acting as arranger and producer. Written in the wake of personal loss and recorded in the midst of the pandemic, -io maps a geography of grief - a place where "everything is ending all the time".

While Fohr's music has never been short on ambition, these songs are striking in their brilliance and strangeness. On -io, Circuit des Yeux has delivered a work that is vivid, immense, and fully illuminated.