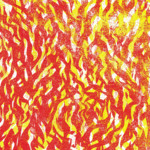 140g grey vinyl. British-born, Belgium-based musician and producer Kevin Martin has shape-shifted through disparate guises and genres - dancehall, experimental hip hop, industrial, hardcore techno - since the 1990s, with his projects packing a characteristically heavy punch. As The Bug, Martin's bass-quaking rhythms are designed to test the hardiest dub sound systems, but his material is also expansive and atmospheric enough to make powerful listening, even when it's just blowing up your headphones.

Fire - the fourth Bug album - has been three years in the making and Martin describes it as "punk as fuck" - as much influenced by the global lurch towards populism and rightwing politics, Brexit and the catastrophe of the Boris Johnson administration as it is by the COVID-19 pandemic. "People always talk about the darkness of my music but for me fire symbolises illumination," he says. The lyrical weight comes from multigenerational MCs, including Roll Deep members Flowdan and Manga, most of whom have regularly collaborated with Martin's other projects. Martin's immense basslines and imaginative backdrops also lend these bleak expressions an invigorating energy (incidentally, Martin provides a "menacing beat" on Halsey's new album). British-Trinidadian writer, musician and performer Roger Robinson's reading of his poem The Missing, about the 2017 Grenfell tragedy, forms an unforgettably haunting endnote.

With its fiercest distillation yet of dub production, heavy dancehall riddims and overwhelming industrial noise, and featuring vocal contributions from an outstanding team of collaborators, Fire is one of the most arresting and danceable albums of 2021.

"A project with literally no skips, 'Fire' seems to lay down a marker for his peers - The Bug is back, and the bar has been raised yet again." - 8/10 ClashMusic.com

"Drawing inspiration from the abject state of contemporary Britain and nourished by fantasies of righteous violence, the latest album from the UK producer is his heaviest in years.

For all the omnipresent menace, it's often a wildly fun listen.

It is electrifying, cleansing, and cathartic, like a fire that razes a corrupt system to the ground." - 8.0 Pitchfork

"Fire is Martin's finest Bug album. It distills both the project's and his philosophy down to its simplest, purest form. In the process, it says something profound and provides a viscerally entertaining masterclass in bass-driven electronica." - 9 PopMatters