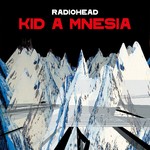 Radiohead's KID A MNESIA marks the 21st anniversary of Kid A and Amnesiac.