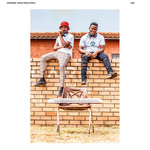 Kgothatso Tshabalala is 19 years old and Zakhele Mhlanga (DJ Zakes) is 18. Their 12-track debut electronic music album, Teenage Dreams, is not easily dismissed as a project that shows their age, though. Teenage Dreams presents a youthful, experimental sound, but the arrangement of each song and how each of the project's composite parts are put together demonstrate an artistic maturity beyond the two producers' respective ages.

A cousin of Tshabalala introduced the two in 2016. Native Soul was formed in 2019. Until then, each of them had been producing music in a variety of styles including hip-hop, different types of house as well as amapiano. They decided that with Native Soul, their focus would be on amapiano - an electronic music movement which, by then, had begun to dominate both mainstream and underground music scenes in South Africa.

Amapiano is an electronic music movement first created and still most popular in the townships surrounding the major cities of Gauteng province in South Africa. The style borrows from various genres which have been popular in South African townships during and after apartheid, including jazz, folk, afro, deep and tech house, kwaito, dibacardi and others. As well as paying homage to all its predecessors, amapiano also has traits entirely of its own making, which differentiate it from its lineage.

On their debut album released by Awesome Tapes From Africa, Native Soul demonstrate the depth of the musical well they draw from.