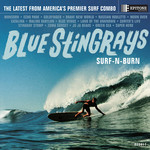 Surf-N-Burn - the bodacious debut record by the Blue Stingrays - has rocked, rattled, and rolled since its original 1997 release. Twenty-four years later and long out of print, Epitone reissue this classic surf rock album on vinyl.

Upon its original release, the members of Blue Stingrays were touted as iconic yet anonymous surf rock pioneers. Now, after decades of whispers and speculation, the identities of these mysterious musicians have been officially confirmed as guitarist Mike Campbell (Tom Petty and The Heartbreakers/Fleetwood Mac/The Dirty Knobs), bassist Ron Blair (Tom Petty and The Heartbreakers), and drummer Randall Marsh (Mudcrutch).

Like those who roamed the globe and found the perfect wave, Blue Stingrays nailed the perfect sound when their first twang rang 'round the world on their now legendary debut.

A1. Monsoon
A2. Echo Park
A3. Goldfinger
A4. Brave New World
A5. Russian Roulette
A6. Moon Over Catalina
A7. Malibu Babylon
B1. Blue Venus
B2. Land of the Unknown
B3. Surfer's Life
B4. Stingray Stomp
B5. Zuma Sunset
B6. Ju Ju Beads
B7. Green Sea
B8. Super Hero