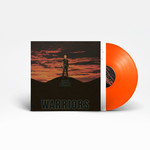 Although roughed up at the edges by a mixture of paranoia and aggression, Numan's fifth album is a fluently executed record, warmed by analogue electronics, and often arranged to create a soothing, dreamlike ambience.

A1. Warriors
A2. I Am Render
A3. The Iceman Comes
A4. This Prison Moon
A5. My Centurion
B1. Sister Surprise
B2. The Tick Tock Man
B3. Love Is Like Clock Law
B4. The Rhythm of the Evening