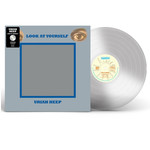 Characterized as heavy metal and progressive rock, the album came to be viewed as a high point in the band's career and is today regarded by many fans and critics as Uriah Heep's finest album (along with Demons and Wizards).

This limited 50th anniversary edition is pressed on clear vinyl.

A1. Look at Yourself
A2. I Wanna Be Free
A3. July Morning
B1. Tears in My Eyes
B2. Shadows of Grief
B3. What Should Be Done
B4. Love Machine