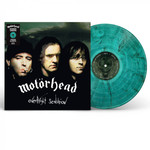 Overnight Sensation is the thirteenth studio album by British rock band Motörhead. It was released on 15 October 1996.

Following the departure of Würzel (Michael Burston) in 1995, the band returned to the same three-man "classic Motörhead line up"; bass guitar/vocals, lead guitar, and drums. Despite being only a three-piece band, the band had a heavier style on this work than on its previous album, Sacrifice.

This limited 25th anniversary edition is pressed on green and black smoke vinyl.