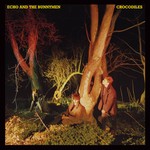 Echo & The Bunnymen were formed in Liverpool in 1978 with Ian McCulloch on vocals and rhythm guitar, Will Sergeant on lead guitar and Les Pattinson on bass. They were soon joined by Pete De Freitas on drums and the rest, as they say, is history.

Released amidst the growing wave of post-punk, Crocodiles cemented the band's reputation as one of the best around with the NME describing it as "probably the best album this year by a British band". The album ultimately broke into the Top 20, finishing in many critics greatest ever debut album lists.