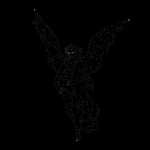 SHILOH: Lost for Words is the debut album by East London rapper and producer John Glacier, widely regarded as one of the UK's most exciting and elusive talents.

In 2019, London-born, LA-based producer Vegyn - who has worked with Frank Ocean and Travis Scott - opened up his studio space to Glacier.

SHILOH has the feel of a mixtape: carefully structured songs nestle alongside works in progress, luxuriating in the tension between her raw lyricism and reticent persona. But Glacier and Vegyn's production - completed alongside a tight-knit ensemble of Holly,Psychedelic Ensemble and Tn_490 - coat the record with a cool, understated gloss and keep it from unravelling.

Centre stage is Glacier's unique vocal style; understated yet possessing a taut conviction, the tone is warped and manipulated for an uncanny twist.
A deeply personal record driven by Glacier's direct poetic delivery and Vegyn's alternative take on hip hop and trap, it's a testament to "how I feel, what I'm going through, and where I want to go in my life" according to Glacier - a bold debut from this unique talent.

"Capturing every moment from a flickering streetlight to hazy, lovedrunk faces, SHILOH wanders the streets of London, and into John Glacier's head. "Whatever bullshit I feel, I just throw it out there," she explains. Whatever it is, it's the making of a legend - one that is sure to take UK rap into unexpected, thrilling places."
LOUD AND QUIET

Side A
1. If Anything
2. Icing
3. Cryptomnesia
4. Trelawny Waters
5. Timing
6. Senseless
7. Boozy
8. Platoon
9. Green Elephants Freestyle
10. Some Other Thing
11. On Formulation
12. No More Left Like It's Death
Side B
Etched design by JIM JOE