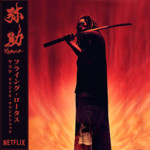 Yasuke tells the story of a samurai warrior of African descent in a fantastical alternate universe version of feudal Japan full of magic, mechs, and of course, swordplay.

With a soundtrack of Morricone style epic tones, traditional Japanese percussion instruments and West African percussion, the feudal yet futuristic world of Yasuke is summoned.

'You haven't really heard an anime score do a Blade Runner thing,' he says, 'I was like, "let me try and get into the headspace of that" but also there were several things that were part of the recipe for me. I thought about when Dilla would sample [Isao] Tomita and people like Vangelis, and how he had a [signature] sound when he did that sort of thing.'

Another spellbinding FlyLo release even without the stylish animations of the show.

"In his score to LeSean Thomas' anime series about a Black samurai in medieval Japan, the Los Angeles musician aligns his visual obsessions with his wide-ranging musical instincts." - Pitchfork

"Flying Lotus's spacey, synth-heavy score for the LeSean Thomas anime stands tall on its own.…not only has Elisson crafted a soundtrack that's singular and spellbinding, he's made one that holds its own against any of his renowned studio albums." - Resident Advisor