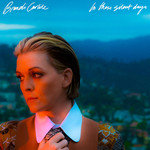 Brandi Carlile
In These Silent Days

Inspired by the mining of her own history while writing this year's #1 New York Times Best Selling memoir Broken Horses, In These Silent Days was conceived of while Carlile was quarantined at home with long-time collaborators and bandmates Tim and Phil Hanseroth.

The ten songs chronicle acceptance, faith, loss and love and channel icons like David Bowie, Freddie Mercury, Elton John, and Joni Mitchell - the latter two who, by some sort of cosmic alignment of the stars, have turned out to be close friends in addition to being her biggest heroes and inspirations.