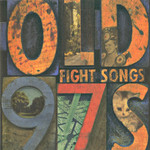 Old 97s are an American alternative country rock band from Dallas, TX, fronted by lead vocalist and primary songwriter, Rhett Miller. Formed in 1993, they have since released twelve studio albums, two full EPs, and have one live album. Starting out as a popular bar band before being spotted by Bloodshed Records, they are pioneers of the alt-country movement during the mid-to-late 90s. Their Bloodshot debut LP brought them to the attention of Elektra Records, who hoped that alt-country could be a new post-grunge trend.

Their music has been featured in a number of film and TV series, including The Break Up, Clay Pigeons, Slither, Ned's Declassified School Survival Guide, Ed, Scrubs, Veronica Mars and Scorpion. Old 97s recorded three albums for Elektra, before moving on to New West and ATO Records subsequently.

Their fourth studio album, Fight Songs was recorded at Kingsway in New Orleans and released on April 27, 1999. The album is slicker and pop oriented than their previous efforts. For the release. six-time Grammy® award-winning producer and engineer, Vance Powell, remixed the 12-track album as the band originally intended; stripping off the slick 1990s-style production and sheen that helped the album get on the radio in 1999.

Features previously unreleased 1998 pre-production demos on a 3rd LP that helps to round out the complete story of this classic 1990's alternative country record.