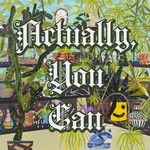 Deerhoof
Actually, You Can

"We suddenly felt extra free and non-judgmental towards ourselves," says drummer Greg Saunier of their audience's enthusiastic reception to these records. Feeling galvanized by the challenge of unifying many styles of music, Deerhoof landed on their next record's concept: DIY baroque. "We wanted our own working person's version of highbrow, with all the operatic flourishes and twinkles and sparkles," says Saunier. Deerhoof set to scheming, using their agility, wit, and outlandishness to create this exuberant ode to unexpected growth.

Be Unbarred, O Ye Gates of Hell
Department of Corrections
We Grew, and We Are Astonished
Scarcity Is Manufactured
Ancient Mysteries, Described
Plant Thief
Our Philosophy Is Fiction
Epic Love Poem
Divine Comedy