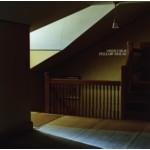 It's been 15 years since Grizzly Bear released their beautiful breakthrough album, Yellow House.

The record, which came out in 2006, was the New York band's second album, and their first recorded as a full band - sounding like no other group in 2006.

Of course Grizzly Bear would go on to refine and experiment with their sound further on each successive release, but they never did get back to the raw elemental power that they displayed on Yellow House.

Whether it'll be your first time or your hundredth, there's never been a better time to walk straight through the doors of the Yellow House and see what you might find.

A1 Easier
A2 Lullabye
A3 Knife
B1 Central And Remote
B2 Little Brother
C1 Plans
C2 Marla
C3 On A Neck, On A Spit
D1 Reprise
D2 Colorado