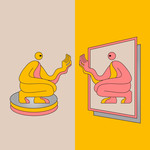 Swedish producer Armand Jakobsson, aka DJ Seinfeld, has always stood out from his peers. Rising to prominence as part of the lo-fi house scene alongside Ross From Friends and Mall Grab, and now developing into something beyond the no-nonsense dance music he pioneered.

Citing late night sessions learning how to produce on his laptop while at university in Edinburgh and 'pretending to be Burial' as key turning points in his journey.

On his first album in four years, DJ Seinfeld zero in on floor-filling club tracks and big, universal emotions. Mirrors is a producer realising his full potential.

'On this album, I wanted to retain a lot of the raw emotionality that brought people to my music in the first place,' says Jakobsson. 'But I also wanted to become a much better producer.'

Mirrors is precisely the kind of dance record we need to hear in 2021 - a striking reminder that brighter days are on the horizon.

"An absorbing return that illustrates his depth..." - Clash

"DJ Seinfeld has lived up to his promise of expanding his production repertoire with Mirrors. There is a bit of everything with atmospheric breaks, garage, Italo disco and house." - Magnetic Magazine

"Making good on the sense of bliss that he has been striving to capture in his music for years, Mirrors is a culmination of these experiments - a way for DJ Seinfeld to show exactly how far he has come." - Pitchfork

"A vibrant house record that presents DJ Seinfeld as more confident, glowing and happy than ever before." - Resident Advisor